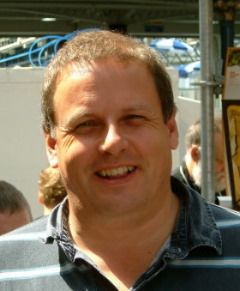 Mat Wilson (One "t", please) is both a beer and railroad enthusiast. He works for a British railway company but you'll often find him riding the rails of Europe looking for beer. He filed this report on the communal breweries of the Oberpfalz (a region of Bavaria right next to Franconia)

One type of beer that has always fascinated me during my trips to Germany, is Zoigl beer, a style of beer that is now only brewed in 5 villages in the Oberpfalz area (that is along the Czech border south of Hof and north of Schwandorf). I have tried several time to try the beer and have only found it once at a local hotel. I thought I had struck lucky once in Marktredwitz but found it to be a commercial attempt to brew the style by the local Nofthaft brewery.

Zoigl beer is brewed at communal brewhouses and is brewed in turn, by one of several brewing families in each of the 5 villages, those families then taking it in turn each week to sell the beer at their home. When the beer is on sale, usually over the weekend, a six pointed star is hung out of a window of the house (or displayed from a purpose built bracket) to denote that Zoigl beer is available.

Myself and a friend decided to go and see if we could find Zoigl beer at 2 of the easiest of the 5 villages to get to as there is a regular train service, and so at 12.00 on Friday 3 rd of June, we found ourselves on the platform at Windischeschenbach (between Marktredwitz and Weiden on German railways line 855).

Armed with information found on www.zoigl.de and

http://www.waldnaab-taler.de/zoigl/ we made our way into the village, crossed the river and up to the Markt in Neuhaus-bei-Windischeschenbach where there are 5 Zoigl brewers. Houses that serve Zoigl beer can be found at numbers 4, 12, 18 and 20 Marktplatz, and a very smart place below the town at 6 Burgstrasse.

Well, we walked up and down, and despite an assurance that we would get a beer at midday, all 5 premises were well and truly locked up. We knew the beer should have been available at No4 (family Punzmann) but there was no sign of life. Then a car drew up and a man hauled a barrel out from the boot (trunk) of the car and went through the door at number 4 so Richard decided that he would try the door and found someone inside and though a combinations of piss poor German and a lot of gesticulating, we found that the beer was not on sale until 14.00. We deliberated about what to do next but then the brewer decided to take pity on us and invited us in, set up a trestle table in the back yard, sat us on a bench and plonked two glasses of beer down in front of us.

At last, after 3 years of failed searching, here was the real stuff. It was very sharp and was brewed with a lot of hops; cloudy and amber coloured and tasted superb, so good in fact we had another, and another.

After about an hour we bade farewell to Herr Punzmann, and wound our way back down the hill and over the river, back under the railway and turned right into Hauptstrasse and into Windischeschenbach. At the far end of the street is the Oberpfalzer Hotel on the small markt platz. There is always Zoigl beer available here from one of the local brewers but it doesn't have the lure of sitting in someone’s front room drinking a beer that they brewed themselves.

Today was our lucky day. Normally there is only one outlet selling Zoigl beer, but today there were two. The first was at Da Roude at 2 Stadtplatz owned by family Heinl. The front room here is very much like a small bar in any pub in the country, and it’s hard to imagine that you are actually in the family’s house.

Their beer was very similar to that already tried at Neuhaus, very bitter and amber coloured but slightly more hoppy, served in a tall glass with a lid. The atmosphere in the bar was very happy and I had the feeling that the large crowd of locals at the large table had been in for quite a long time.

The third establishment was Beim Glosser at 2 Lehnerberg owned by family Popp, just beside the hotel. Here we were able to sit out in a nice cobbled courtyard at the rear of the house and drink the beer in the shade. The beer was very much like the previous two tasted with hops at the forefront and if anything slightly colder than the previous 2.

We never paid more that €1.40 for a glass of beer all day and the food was equally as cheap and consisted of bar snacks.

On the ‘waldnaab-taler’ web site you will find a calender for all the 5 families brewing in Neuhaus and the 9 families in Windisch and which days their beers are available. If you’ve got a day to spare, go and try the beer. I have known better beer hunters than myself who have sought and failed to find Zoigl even when they knew it was on in the village.

There used to be 75 villages where Zoigl beer was brewed and I suppose it is the last remnant of really traditional old fashioned brewing. Today Zoigl beer can only be found in Nehaus and Windisch, which are easy to get to, and at Mittereich and Falkenberg, north of Windisch and at Eslarn, southeast of Weiden right on the Czech border. The latter 3 are not so easy to get to, but I’m sure a resourceful beer hunter will always find a way of getting to the more out of the way places.

On your way back out of Windisch take a quick detour down the second side street to view the brew house.